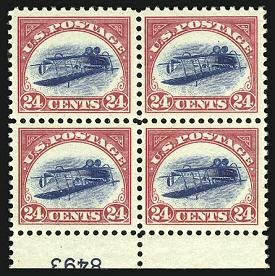 In 1918, collector William Robey purchased a sheet of 100 stamps from the main Washington post office for $24.
He afterwards noticed that the plane shown on the stamps was upside down. One week later, he sold the sheet for $15,000.

More than 90 of those stamps still exist, but there is only one plate book.
That one was sold on Wednesday for $2,970,000 to an unrevealed private collector. 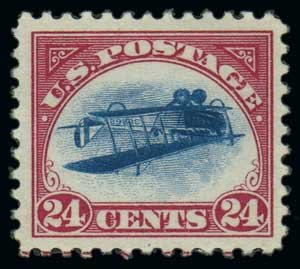 Scott Trepel, president and owner of Robert A. Siegel Auction Galleries, wouldn't want to reveal the identity of the buyer. Not now nor back in 1989.
Trepel declared: "I'm going to respect his desire for anonymity. I think he got his thrill owning the plate block and wouldn't get much of a thrill at having the world know his name."
Publicado por EC en 11:10 No hay comentarios: 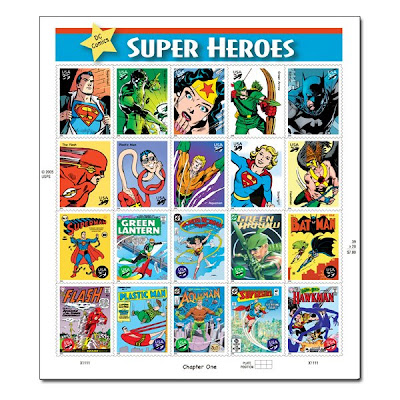 With these 20 colorful stamps, the U.S. Postal Service honors stars from the world of DC Comics. Ten stamps on this pane show portraits of super heroes; the others show covers of individual comic books devoted to their exploits. Art director Carl T. Herrman worked with the creative staff at DC Comics on the design of this issuance. Beginning with the classic covers, information about the artwork shown on each stamp follows. 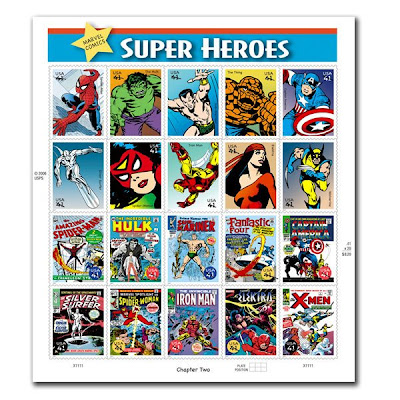 With these 20 colorful stamps, the U.S. Postal Service salutes stars from the world of Marvel Comics. For decades, Super Heroes have been synonymous with the comic book medium. Their adventures have provided an escape from every day life and demonstrate that individuals can make a difference. Comic books aren't simply "kid stuff"—adults have always been among their readers, and the form has attracted its share of serious artists and writers. And Super Heroes have responded to social and political issues from their beginnings.

The other 10 stamps depict individual Marvel Comic book covers. Information about the artwork shown on each stamp appears on the back on the stamp pane
Publicado por EC en 1:11 2 comentarios: